In the book Master Lv’s Spring and Autumn Annals 吕氏春秋, an Chinese classic text complied around 239 BC, there is a story about Yu the Great, who was a legendary ruler in ancient China around the Great flood time around the year 2000BC. The story says once Yu the Great passed the place TuShan 涂山 and said, “there should be an omen of me getting married.” Then there he heard the song from a local girl who claimed to be a white nine-tailed fox and was interested in having a family with Yu the Great. Later they got married and had the son Qi 启. In this story, nine-tailed fox not only represents fertility but also royalty.

During the Han dynasty especially the Eastern Han dynasty, which is between the year 25 ~220, the idea of heavenly prophecy was popular especially in the politics. Nine-tailed tails was symbolize as a beneficial god and even more emphasized as an auspicious omen that appeared during times of peace with the wise king. From the stone carvings during the Han dynasty, we could find the image of nine-tailed foxes on the side of Queen Mother of the West 西王母. We have talked about Queen Mother of the West in Ep74, please check it out if you want to know about her. In the stone carvings, the Queen Mother of the West is always in the center with a dragon and a tiger on her two sides and a toad underneath. A nine-tailed fox is in the corner. Sometimes the fox has six, seven or eight tails. So far it seems the nine-tailed fox is still a holy spirit.

Since Tang dynasty 唐朝 between the year 618~ 907, the holy royal fox spirit started become more popular among the normal people. They are not just for the king but they started to appear in folklore. People started to worship fox spirits in villages. The famous poet from the Tang dynasty Bai Juyi 白居易 wrote an article in which he compared Daji 妲己 and Baosi 褒姒 with fox spirits. Daji is from around the 1000 BC. Baosi is from around 700 BC. They were both the consort and concubine of two kings and their stories are both known as the classic examples of how a beauty causes the downfall of a dynasty in Chinese culture. We will talk about their stories in our future episodes. But clearly here, they are considered as the negative influences on the kings and the fox spirits started to change.

In the Song dynasty 宋朝 between the year 960 ~ 1279, nine-tailed foxes were almost totally became the evil spirits that seduce people based on the article we just talked about. This is when Japanese and Korean heard about the fox spirits and became Kitsune in Japanese mythology and Kumiho in Korean mythology. In English the word Huli jing 狐狸精 from Chinese in just used as fox spirits.

One of most known mythical story of nine-tailed fox is from the book Investiture of the Gods 封神演义from the Ming dynasty 明朝 in the 16th century. The story confirmed that Daji is an evil nine-tailed fox spirit in a beautiful woman’s form. The king Shangzhou 商纣 王didn’t do anything wrong but was just seduced and haunted by her. 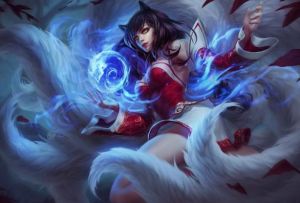 Until today, people still love the stories of fox spirits and the image is a fox spirit becomes more complicated and interesting. Like the word Huli Jing 狐狸精 in modern Chinese has been a negative word to refer to a woman who is good at flirting with men and interfere other people’s relationships. However, today maybe some women probably wouldn’t offended being called as a Huli Jing. Women can be whoever they want to be if they choose to be. Good at flirting and being extremely attractive is not so bad, right? Because we know the downfall of a dynasty is not caused by a woman and if the man is seduced, he should be responsible for it.

山海经 Classics of Mountains and Seas

封神演义 Investiture of the Gods

聊斋志异 Strange Stories from the a Chinese Studio